Discovery of Rock salt dates back to the days of Alexender the great in 326 B.C. The licking of out crop salt by the horses of Alexender the great, who fought battle with Raja Pours on the bank of River Jhelum about 35-40 Kms away form Khewra led to the discovery of Rock Salt deposite at Kehwra. It is a huge and one of the richest salt fields in the world. The salt range is over 186 miles (300 kilometers) long and 8 to 30 Kms wide with average height of 2,200 ft. It starts from Baganwala near jehlum river to Kalabagh near indus river. Khewra gorge is known as “Museum of Geology” where rocks pre-Cambrain age to recent period are exposed. prior to annexation of punjab by the province were owned and oprated by the janjua Rajas, and after its annexation, the British Government took over the administration of these mines. 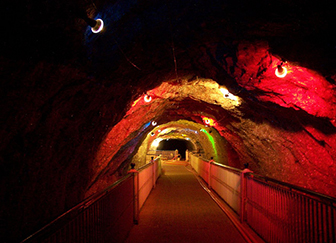 Centuries ago, the salt was taken from the out crops of the salt seams exposed who were living in its vicinity. Dr.Warth ,a renowed Mining Engineer of UK laid out the main tunnel at ground level in 1872 to have an easy and direct approch to salt deposites. The scientfic mining system introduce by Dr.Warth in the year 1872 is still in vogue. At present there are 17 levels in the Kehwra Mines. Under scientfic working system only 50 % saltis excavated from the working seam while the remaining 50 % is left there as pillars for support of mine.

Its highest altitude at Sakesar Mountain is about 4990 ft. Another salt range in the country is Kohat saline series which starts from Jatta Ismaeel Khel and Covers almost all the hilly terrain up to Bahadur Kehl, District Karak.

It has tremendous potential for expention in local consumption and export to other countries. Decoration pieces like; lamps, vases, ashtrays etc. are also made from Khewera Rock Salt and exported to forign contries in larg quantity.